This is a guest post by Christopher Clark, creator of EclipseTracks.org. - Sarah

Later this summer, on August 21, the 70 mile wide shadow of the Moon will race across the continental United States at over 1,500 miles per hour. The sun’s elusive, spectacular corona will be visible in twelve states coast to coast for a few fleeting minutes as the total solar eclipse unfolds throughout the day.

It’s been a long time coming. The last time any of the lower 48 states had such an opportunity was 38 years ago. This is the first real chance for many of us, having lived in America all of our lives, to see one of the most rare and eerie celestial events our planet has to offer.

As a long time astronomy enthusiast, I was originally drawn to Cesium several years ago when beginning the planning process for seeing this eclipse firsthand. That led to the development of EclipseTracks.org, an open source Cesium-powered site for visualizing and exploring solar eclipse events. 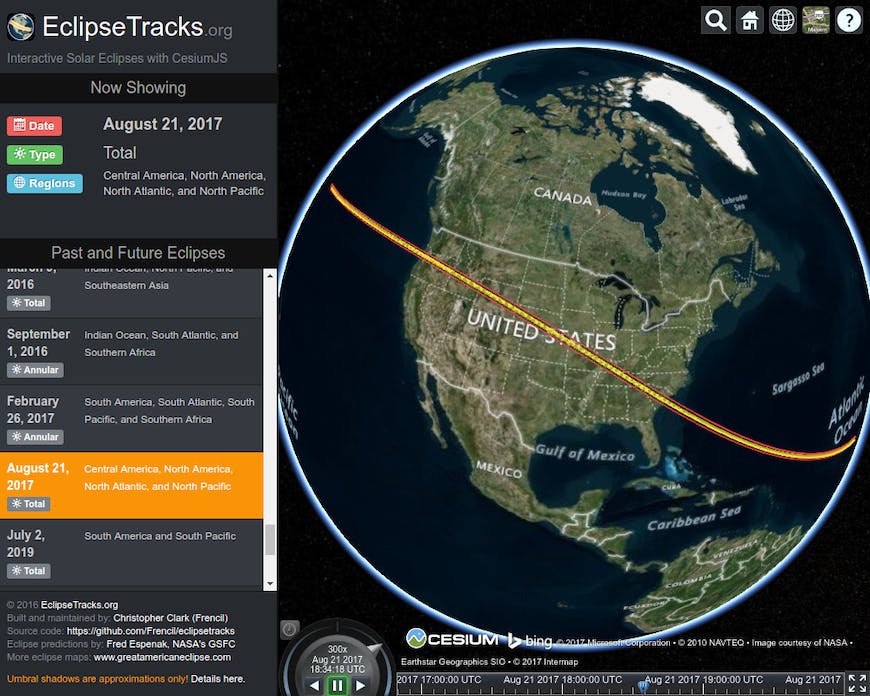 I originally wrote on the Cesium blog about the launch of EclipseTracks.org back in March of 2015, the day before that year’s only solar eclipse would sneak across the Arctic. Since then it’s been a pleasure to iterate on the project. Eclipse events spanning over 100 years, past and future, have now been added using NASA eclipse data. The improvements in core Cesium (between 1.4 in 2015 and 1.35 today) have dramatically improved performance when jumping around eclipse events in space… and time.

It’s actually the time dimension of solar eclipses that makes Cesium such a perfect tool for visualizing them. Total solar eclipses are pretty rare–typically only one or two occur in a given year. But the swaths of Earth touched by the umbral (complete) shadow of the moon are thin ribbons, and the Earth is a pretty big place. To have one of those ribbons come within a few hundred miles of one’s home is something that may only happen once or twice in a lifetime.

Here’s how those ribbons of shadow last touched the contiguous United States (and only just) back in 1970 and 1979. 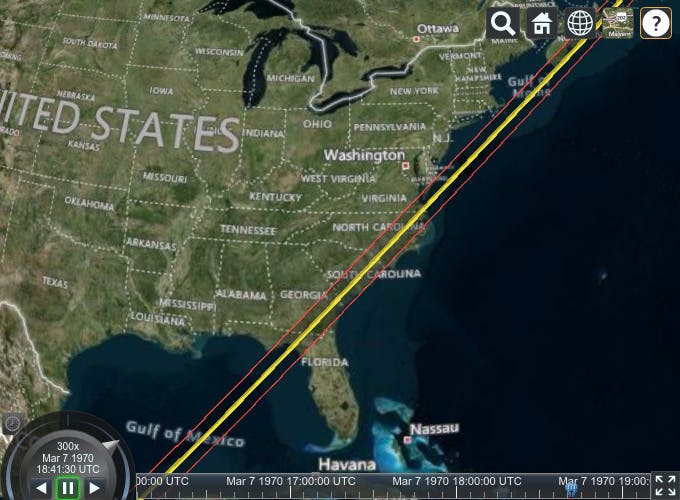 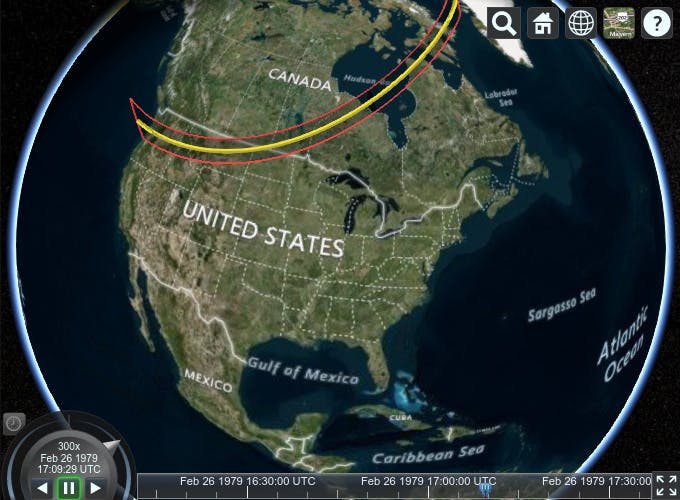 ​But it’s not just the time in history that makes total solar eclipses so elusive, it’s the time of day. The Moon’s umbral shadow is relatively small (about twice the size of New Jersey at its biggest) and moves at over twice the speed of sound. To catch it, and to be close to its center line for the longest time beneath it (a few minutes), takes determination and ingenuity.

Cesium excels at providing tight time controls to dial in the timing of solar eclipse totality at arbitrarily precise locations. The Animation and Timeline widgets, along with pan and zoom controls, makes for a very effective 4-dimensional exploration tool.

As anyone who has chased eclipses knows, exploration and planning up front is critical! If you’re interested in visiting a spot along the center line for the August 21 total solar eclipse then here are some tips to help ensure you get the best possible viewing experience: