In the early days of Cesium, I was able to keep track of all the apps being built with Cesium. As the community grew, I could no longer keep up with each project and interact with everyone individually. It’s a sad but perhaps necessary milestone as a project becomes widely adopted.

3D Tiles has now reached the same point where I can’t track all the activity. This blog post is a snapshot of the current happenings — as best as I know them — and near-term plans.

We continue to do all the design discussions and updates in public on GitHub in collaboration with the community.

The 1.0 spec is largely complete. The remaining issues are small enhancements or spec cleanup, with the two bigger issues being explicit tiling schemes and deciding if vector tiles should be included in 1.0.

We’re going to do a Cesium community review of the spec in the next few months, very likely in late April, to gather any last-minute feedback before finalizing 1.0.

3D Tiles is in the OGC Community Standard process. We’ll start the final review and vote to finish the process after the Cesium community review period. In the meantime, I have been doing various briefings, including one for the 3DPS SWG at the OGC TC meeting last week.

The 3D Tiles engine in Cesium is in really good shape; it is in the 3d-tiles branch, which has become “the new master” given how widely used it is. The implementation has been publicly code reviewed, and has full unit tests, reference docs, and a ton of optimizations, everything from fancy visibility tests to texture compression to mesh quantization.

We’ll do a final code review at the same time as the Cesium community review of the spec.

We are developing several 3D tiling pipelines to convert datasets into 3D Tiles as part of our upcoming Composer product on cesium.com. These multiprocess pipelines tile massive geometry and texture datasets, including

We are also working with several users on direct tiling pipelines for their datasets. Feel free to email me if you have a dataset you would like us to tile. 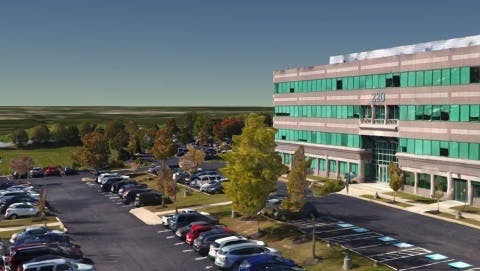 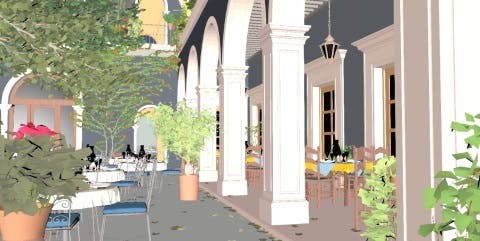 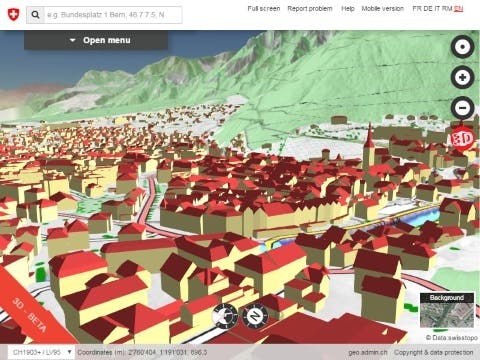 3 million structures with roof geometries and overhangs by swisstopo. 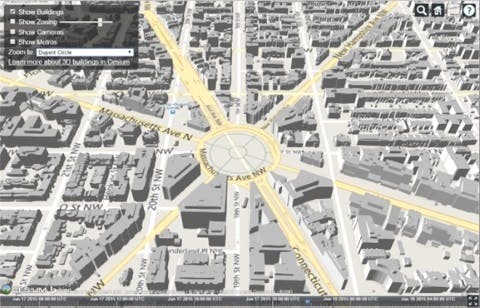 135,000 buildings with per-building attributes fromCyberCity3D, one of the first 3D Tiles users. 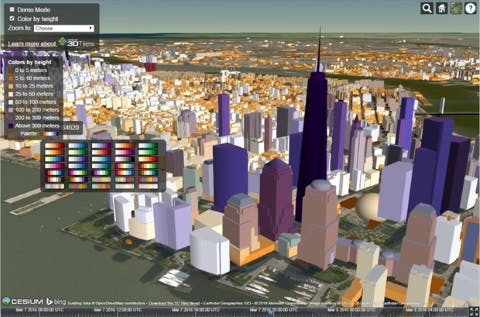 1.1 million buildings in NYC converted from CityGML or OpenStreetMap. Give it a try.

glTF is an open standard for the efficient transmission of 3D models by Khronos, the same consortium behind WebGL, Vulkan, and COLLADA. The Cesium team has collaborated on glTF since its early days and I serve as the coeditor for the glTF spec.

I often describe 3D Tiles as a spatial data structure with glTF nodes and declarative styling based on metadata. 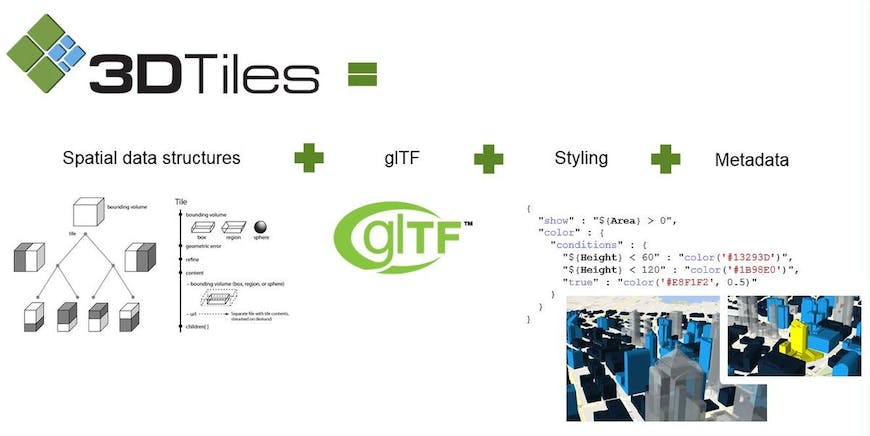 3D Tiles and glTF. For more on glTF, see www.khronos.org/gltf.

glTF adoption has been fantastic. Oculus is adopting it, Microsoft is adopting it as the 3D format across their product line, and it is even being built into Chrome by the Google Chrome VR team.

All this adoption is creating innovations that benefit 3D Tiles, both by leaning on the glTF spec and the broad open-source software ecosystem. Some examples:

It’s been incredible to facilitate the growth of the 3D Tiles community. Users are creating a complete 3D Tiles ecosystem: exporters, converters, renderers, and validation tools!

Here are some examples of what folks are building.

ContextCapture exports 3D Tiles of reality meshes created from digital photography and scanning devices. The Penn State model shown below was created from 2,500 photos (100+ GB raw data) taken from a small plane at 1,000 ft during a 90-minute flight. The resolution is approximately 1 inch! 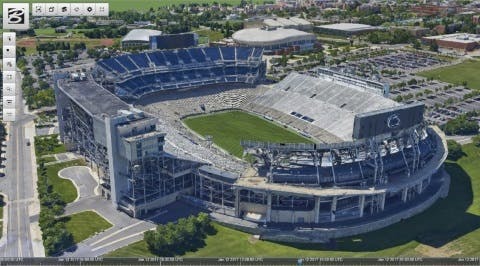 MicroStation is used to create highly detailed infrastructure engineering models. There is work-in-progress to export these models to 3D Tiles using batched (b3dm) and instanced (i3dm) models as well as point clouds (pnts).

There is also work on rendering 3D Tiles inside MicroStation. Seeing 3D Tiles renderers other than Cesium is really exciting to us and fantastic for the 3D Tiles ecosystem. 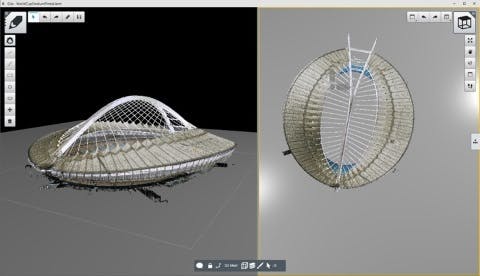 Cityzenith has a 3D Tiles pipeline for 3D buildings as part of their City Information Modeling tool. 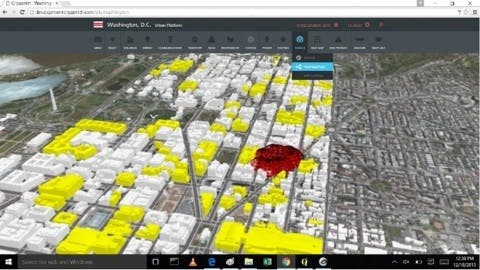 Data61 converts massive point clouds to 3D Tiles. The image of Queanbeyan, New South Wales, Australia below is a 130 GB point cloud with 4-8 points per meter. 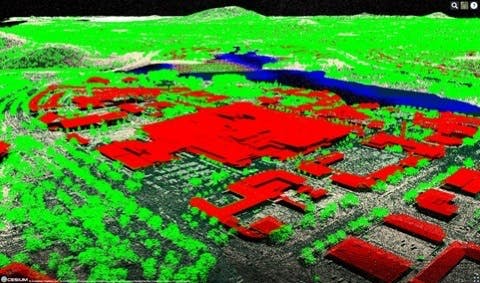 Entwine has 3D Tiles converters for point clouds. The 4.7 billion points from the USGS scan of NYC below was tiled in two hours using Amazon’s 30 core machine. 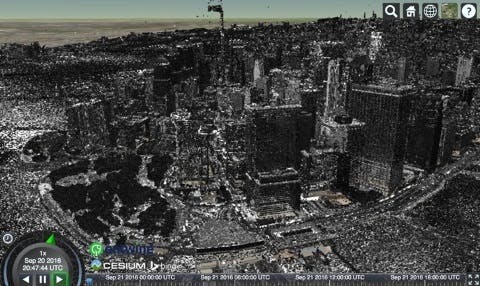 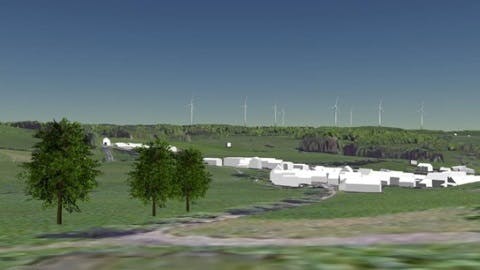 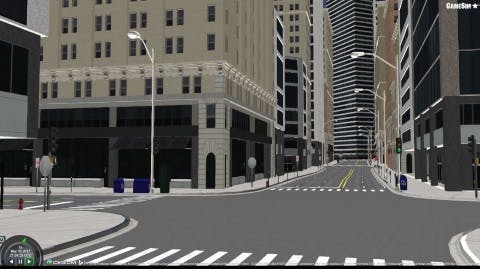 NASA JPL is investigating the use of 3D Tiles for the visualization of Mars datasets using Unity.

OSG.JS has work-in-progress for a 3D Tiles renderer. This is another example of 3D Tiles being adopted in a rendering engine. 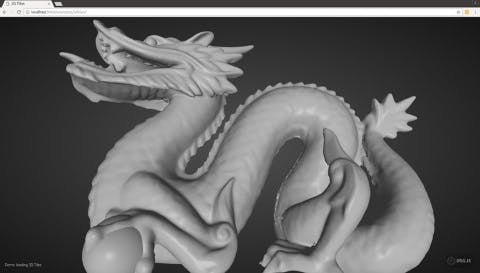 SiteSee has work-in-progress for a 3D Tiles renderer in three.js for visualizing photogrammetry models of cell towers. 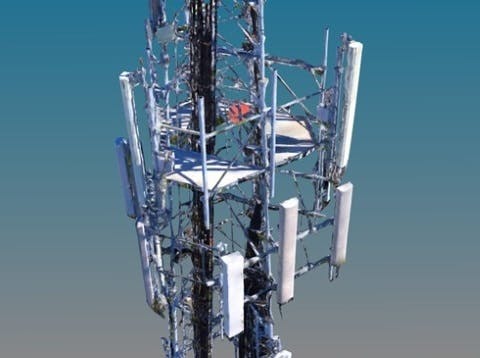 virtualcitySYSTEMS has 3D Tiles converters for CityGML and point clouds used in their city planning solutions. 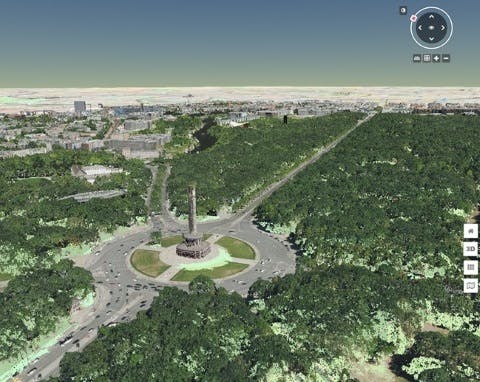 The 3D Tiles Tools project is a joint effort by the Cesium team and University of Pennsylvania students to provide tools for manipulating tilesets, validating tiles, and generating tilesets for testing.

How to get involved

Collaborating with the community is one of our favorite things to do. Work with us!

Here’s a few ways to get started: