This is a guest post by Ricardo Morin, whose projects HOWL and RikiTraki are showcased on our demos page. The post is about working with time dynamic visualization, which is a prominent feature of HOWL. - Sarah

One of the features I like the most about Cesium is how easy it is to incorporate time dynamic visualization into your 3D geospatial projects. In this article, I will walk you through how to easily add the time dimension to your project, using an example from the live web site OregonHOWL.org.

The purpose of the visualization is to break down the history of wildfires by year so that the user can have an at-a-glance view of wildfire events over the entire historical period using a time animation, as seen in the figure below.

The alternative static view of the same data depicted below may be overwhelming to the user. 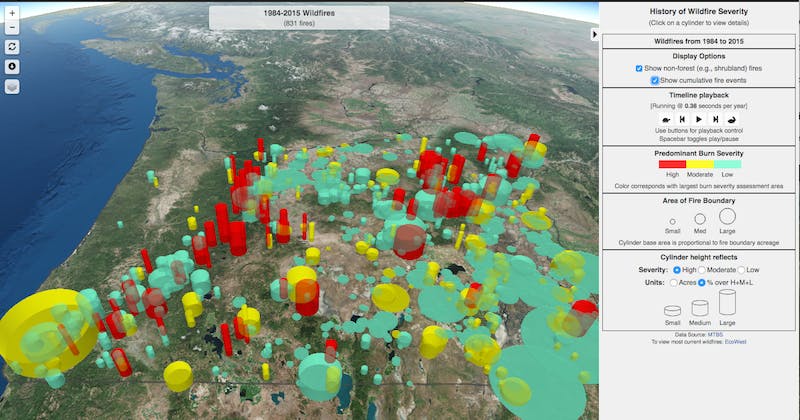 You can play with the above view here.

First, Find the Time Dimension in Your Data

The data for this OregonHOWL view was obtained from the Monitoring Trends in Wildfire Severity (MTBS) website and reformatted in GeoJSON for easy consumption in a Javascript-based Web application. The source file consists of a GeoJSON FeatureCollection in which each wildfire is represented as a Point geometry like the item below.

Notice how in our example the time dimension is the ignitionDate, highlighted above.

Second, Build a CZML Document from the Source Data

Cesium provides three abstraction layers that can be used to incorporate 3D visualizations in an application. The lowest layer is exposed in Cesium’s Primitive APIs, which offer the highest level of control over Cesium visualization capabilities, but at the expense of more low-level programming and requiring in-depth knowledge of how Cesium works. The next layer is the Entity API, which provides the ability to define high-level objects, and while requiring much less programming than the Primitive APIs, it still demands a fair amount of coding. And finally, the highest layer is CZML, which provides a data-driven interface to Cesium’s vast set of visualization capabilities.

But what exactly is CZML? Quoting the CZML Guide from Cesium, “CZML is a JSON format for describing a time-dynamic graphical scene, primarily for display in a web browser running Cesium.” A CZML document is an array of ‘packet’ elements, each of which represents one object in the Cesium visualization scene (e.g., a cylinder in our case), and its associated properties (e.g., color, position, availability). It is worth mentioning that the Cesium Sandcastle site provides a fair number of live examples that can be used to learn CZML.

In our example, we load the data from the source JSON file using AJAX (e.g., jQuery.getJSON) and pass the result to the function makeCZMLAndStatsForListOfFires, which iterates over the GeoJSON FeatureCollection, creates a packet for each Point geometry, and returns a complete CZML data structure ready to be passed to the Cesium viewer.

Third, Load the CZML Data onto Your Viewer

The final step to visualize your data is to add the CZML generated data to our Cesium’s viewer.

And Finally, Make Some Tweaks

You will definitely want to make some tweaks to your viewer, to adapt it to your required user experience. Some example tweaks include:

Customizing the Widget that Controls the Animation

While Cesium includes its own widget to control the time animations, you may want to customize a user interface for the aesthetics of your site. In the OregonHOWL.org site we replaced the default widget with a custom user interface to provide the ability to play, pause, start, end, speed up, and slow down the animation.

First, create your ClockViewModel from the viewer’s clock:

Customizing the Timeline Shown at the Bottom of the Viewer

While Cesium offers a default timeline, you can create a customized timeline to fit your user interface requirements. In the case of OregonHOWL.org, since we are only animating annual events in the Wildfires view, we customized the timeline labels to display only the year, instead of the full timestamp as with the default widget. We do this by overriding the viewer’s timeline make Label function:

Please note that makeLabel is a private function of Timeline and as such is not in the official documentation. If the Cesium developers decide to change this function in the future, this functionality could be affected.

As you can see in our application, the label on top of the viewer dynamically displays the year and the number of fires being displayed as the years go by.

To achieve this, simply attach an event listener to the viewer’s clock, and in the callback execute the logic necessary to update the user interface elements.

Be sure to check for the granularity of the time events so that you update user interface elements only when necessary. This is important, because updating the DOM is very expensive and you do not want to perform DOM operations if nothing actually changed. In our case, we only change the information on the label as the year changes.

The code for the complete project is open source and is available on Github. The code most relevant to this article can be found in the wildfire view under the src directory.

In the OregonHOWL.org there is a different view (The Journey of Wolf OR-7), which implements the time simulation using a combination of the time dimension in the objects’ position and the packets’ availability property. The code for that view is here.

I hope this article helps you painlessly incorporate the time dimension in your Cesium applications.