I can’t think of anything that better exemplifies Cesium’s belief in combining geospatial and 3D computer graphics than the support of Epic Games and the Epic MegaGrants program to build Cesium for Unreal Engine.

This marks the first time a full-scale, high-precision 3D globe is plugged into a leading game engine, opening a world of possibilities for Unreal’s users. Together we will advance training & simulation, architecture, games, AR/VR, autonomous driving, and other industries by enabling 3D Tiles to be streamed into Unreal for accurate visualization of real-world locations captured by satellites and drones—using the same 3D geospatial knowledge that has gone into CesiumJS for nearly a decade.

“Our vision is to allow the simulation community to integrate Unreal Engine as part of their software architecture without having to change the way they work. Defining this 3D Tiles plugin with the Cesium team is a super exciting experience as it will allow the GeoInt community to simplify their pipelines. This activity converges very nicely with our vision towards large open worlds for all users of Unreal Engine”-Sébastien Lozé, Simulations Industry Manager, Epic Games

When I started graphics programming in 1994, Epic—or Epic MegaGames back then—was an inspiration. The DOS games they published had graphics and gameplay that were light years ahead of anything I’d ever seen.

Our focus is on growing the 3D geospatial ecosystem using the 3D Tiles format: the OGC community standard for efficient streaming of massive heterogeneous real-world 3D datasets for visualization and analysis.

3D Tiles is widely used by government and commercial entities for global-scale terrain, city-scale photogrammetry, and massive point clouds from LIDAR. 3D Tiles enables the streaming of massive geometry and texture as well as the semantics computed by AI algorithms to use for filtering, styling, and analysis at runtime. For example, per-point classification in a point cloud can be used to filter out the foliage, or material properties on the side of the building in a photogrammetry model can be used for Telecom so RF propagation takes into account concrete or glass.

Cesium for Unreal will be open-source and available for free on the Unreal Marketplace. 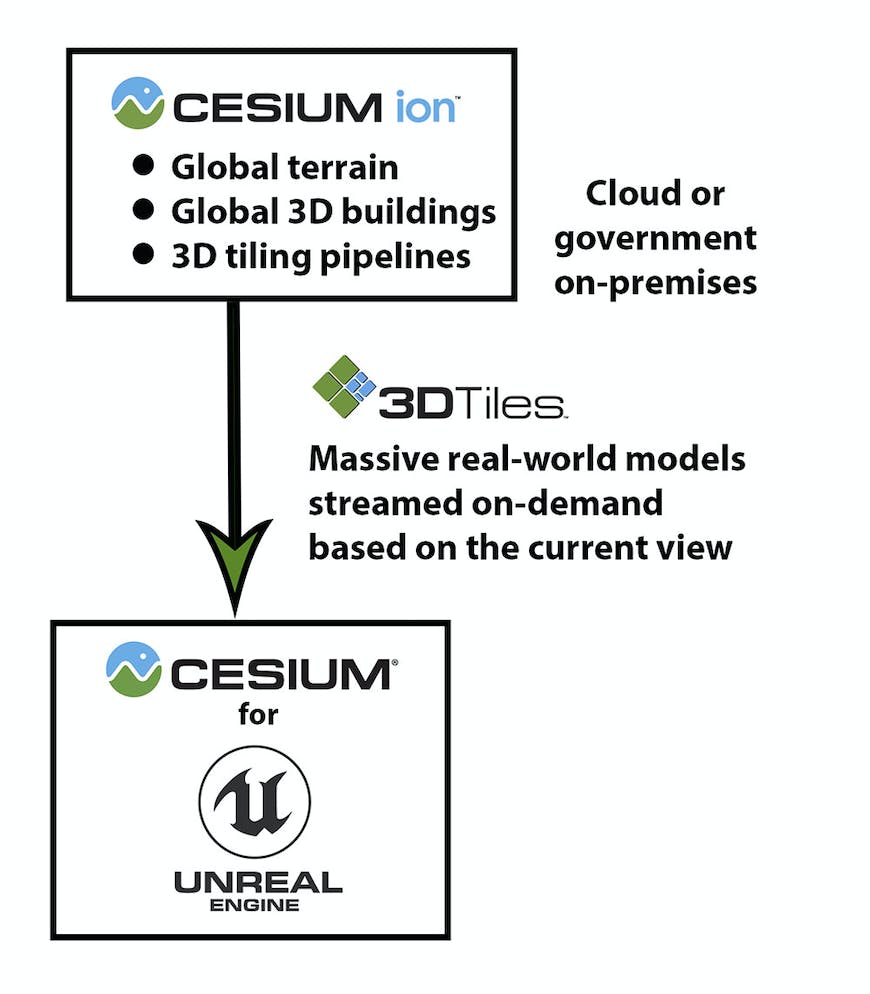 Cesium for Unreal will have a default connection to the Cesium ion SaaS platform for ready-to-use 3D Tiles of terrain and 3D buildings, and best in class content pipelines for generating efficient 3D Tiles from source data such as terrain, imagery, and photogrammetry models. Cesium for Unreal will also be able to stream 3D Tiles over on-premises private networks with Cesium ion.

Stay tuned as we make progress. Feel free to reach out to discuss collaborations or share your use cases for Cesium for Unreal.