This is a guest post by Pascal Poulain about some experimental work he did on embedding time series inside 3D Tiles. He uses weather prediction data to illustrate the concept. - Sarah

When visualizing spatio-temporal datasets in CesiumJS, out-of-core processing, based on 3D Tiles, can offer better capacities in terms of loading massive contents. This requires developers to first convert the input dataset into 3D Tiles according to a tiling strategy, and inside the CesiumJS application to natively optimize for massive loading with streaming and management of different levels of detail.

This post introduces some experimental work done to embed time series inside 3D Tiles. Doing so adds 4D capacity from temporal metadata stored in the tiles.

Numerical weather prediction can be accessed through a standardized data exchange format known as GRIB format. GRIB data are distributed in two formats by national or international weather agencies. The most usable for spatio-temporal needs is GRIB2.

As a basic overview, a GRIB file stores a set of messages. Each message

By analogy, if each message were an image,

The general idea is to generate a time series of a physical property at each geolocalized point of the grid and to use the class sampledProperty to manipulate the time series within a tileset.

In the example below, the physical property is the expected fraction of clouds in a grid cell (cld_fract). 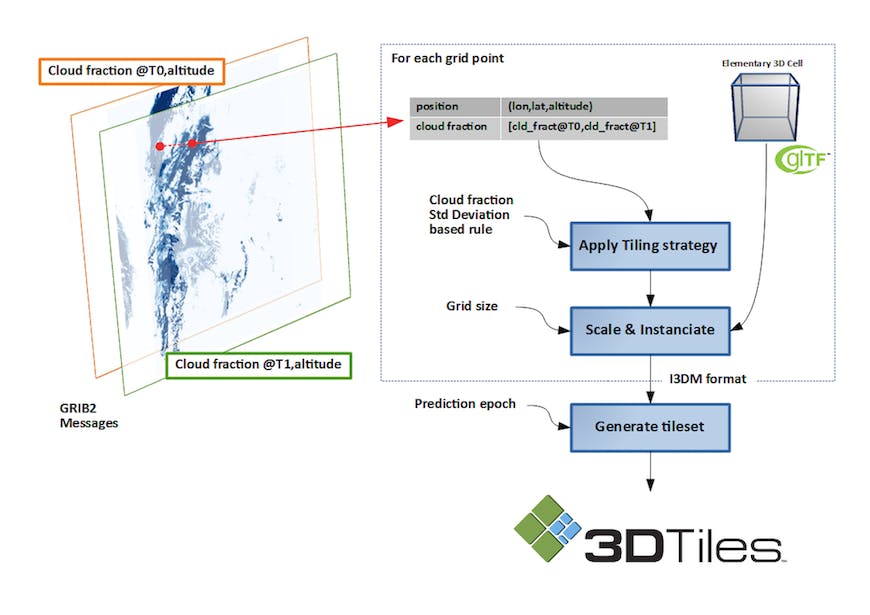 When the tileset is loaded into a CesiumJS based application, some specific actions are defined to

An example is better than a long description; below is a snippet of code to render a pseudo cloud cover from a 3D tileset generated with this methodology.

The expected fraction of clouds is used to set the alpha of the color assigned to a feature to simulate the cloud cover.

The following video illustrates some results that can be achieved from the above snippet. The GRIB dataset is from METEO-FRANCE, but similar results can be obtained from other providers such as NOAA, the Meteorological Service of Canada, etc.

All the tiles are loaded based on the tileset definition without any check for time applicability. This is the applied style which controls the rendering over time by changing the transparency of the cells. This may generate performance issues on a large dataset. On the used data, some filtering has been applied at conversion level to not define instances for cells with a forecasted cloud cover below a threshold. By the end, the number of instances is below 200K to cover 80% the globe at 0.5° of resolution and one level of altitude.

The results from the experimentation are positive:

Below are some ideas of possible works to improve and generalize the methodology prior to use in production on massive datasets and spatio-temporal use cases: